The Skin of Our Teeth

Thornton Wilder’s Pulitzer Prize winner from 1942 was dusted off with panache at a theatre known for its staging of American classics.  As the first guest director in company history, the production extended and was  a critical and box office success. 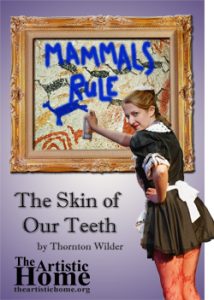 “Jeff Christian’s cunning and sometimes breathtaking production of Wilder’s “The Skin of Our Teeth” for The Artistic Home provides plenty of reasons of its own for re-examining Wilder’s influence.”    Chicago Tribune, 3.5 stars

“The performance and staging of this American essential (winner of the Pulitzer Prize) is heightened by a multimedia presentation.  The Artistic Home has taken on the Thornton Wilder challenge in adapting this beloved farce and, in keeping with the activities of their Wrigley Field neighbor, has knocked it out of the park.”   ShowBiz Chicago

“Thornton Wilder’s follow-up to Our Town is one of the least-produced Great American Plays. The last time I saw it professionally staged, nearly a decade ago, an accomplished director was buried by it.  Fortunately, director Jeff Christian is not buried by the play. He and the Artistic Home succeed admirably where many others have failed. First, Christian uses simple staging devices and the audience’s imagination to create the play’s shifting landscapes, climates and disasters so the need for special effects doesn’t overwhelm the production. Next, Christian and cohorts strike just the right balance between farcical and satiric elements in acts I and II and the solemnity of Act III. Christian lets his actors be big where needed for comic effect, then pulls them back precisely on schedule. Finally, the production avoids any whiff of cynicism over Wilder’s cautionary but optimistic elegy to the resilience and innate goodness of Mankind.”   Windy City Times 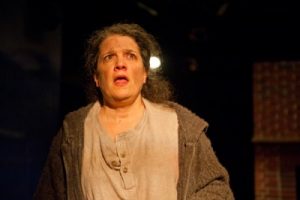 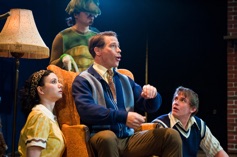