Lay Me Down Softly

A gritty drama set in Delaney’s Traveling Roadshow of the Irish countryside, the Seanachai ensemble attacked the boxing sequences, love scenes and family disputes with their characteristic passion and humanity – resulting in a lyrical production, at turns both beautiful and violent. 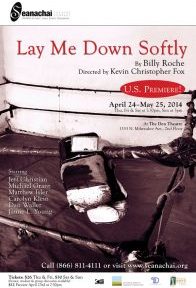 ““And the actors — each of them pure perfection, but also a model of ensemble synergy — not only live in the immediate moment of their characters’ lives, but magically suggest the years of rage, disappointment, frustration and loss that have made them who they are. At its center is Theo (Jeff Christian), a big, volatile, self-made guy.”    Chicago Sun-Times

““The grasping mercenary world is ruled by Christian’s Theo with iron hands. (The way Christian chews at a perpetual toothpick suggests the restless appetites and violence churning at his innards.)”    Chicago Tribune

““But for Theo (Jeff Christian) and his dysfunctional troupe of fools, the last 50 years never happened. Theo is a real brute — and proud of it. Blisteringly portrayed by Christian, one’s imagination doesn’t have to go far to see a few manslaughters in his past, and perhaps a few in his future. It’s all about Theo, and he never lets anyone is his metaphorical or physical grip forget that yes, indeed it is all about Theo — and Theo’s money.     Gaper’s Block

“A cast that’s comedic and melancholic in equal measure charms and invites you to care about a story of small fortunes. It only takes a few minutes before we know the hierarchy of the troupe and the odd tics that define them. I’d believe the whole operation would fall apart if Theo (Jeff Christian) couldn’t find a toothpick to gnaw, or if Junior (Dan Waller) couldn’t always fix the turnstile.”    Time Out Chicago

“Theo (played by the appropriately burly Jeff Christian) the quixotic owner can, in an instant, go from quietly commanding to explosively angry.”    Chicago Theatre Review

“The acting was superb. Jeff Christian led the way as the emotionally explosive patriarch.     Chicago Critic 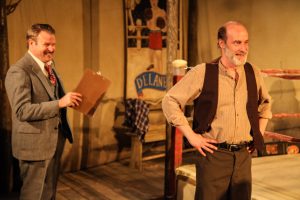 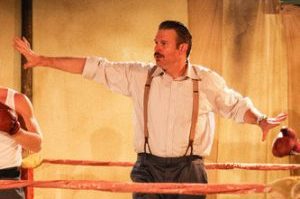 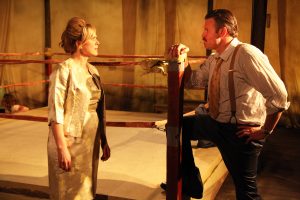