Creating a vivid world without the aid of scenic design or props, two actors play 17 characters in Owen McCafferty’s rollicking and poignant thrill ride through 1970 Belfast.  The bittersweet tale of innocence lost was hailed as an artistic triumph for the company. 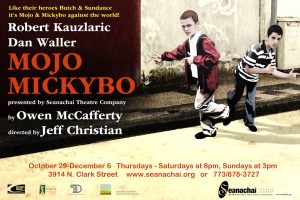 “In Jeff Christian’s brisk, athletic staging for Seanachai Theatre Company, Robert Kauzlaric and Dan Waller play not only the boys but everyone else in their world — troubled parents, eccentric shopkeeps, neighborhood thugs. Their characterizations are crisp, their accents flawless, their depiction of boyhood boisterous, touching, and true.”     Chicago Reader – Critic’s Choice

“Jeff Christian’s direction keeps the sentiment at bay…and the scenes where the two mimic their heroes are comic treasures.”   Chicago Tribune ***

“While Seanachaí’s bare-bones black-box staging at first underscores the actorly tour de force, over the course of the hour the imaginative landscape of Belfast emerges.”   Time Out Chicago – Critics’ Picks

“Director Jeff Christian’s production is well served by its two actors, who transform on a dime without ever turning their numerous characters into stereotypes and — most importantly — without in any way condescending to their young main characters.”   Performink – Critics’ Pick 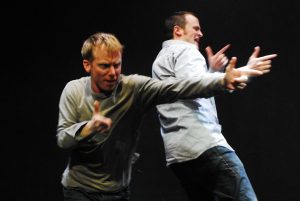 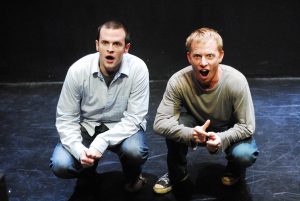 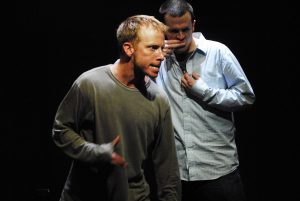